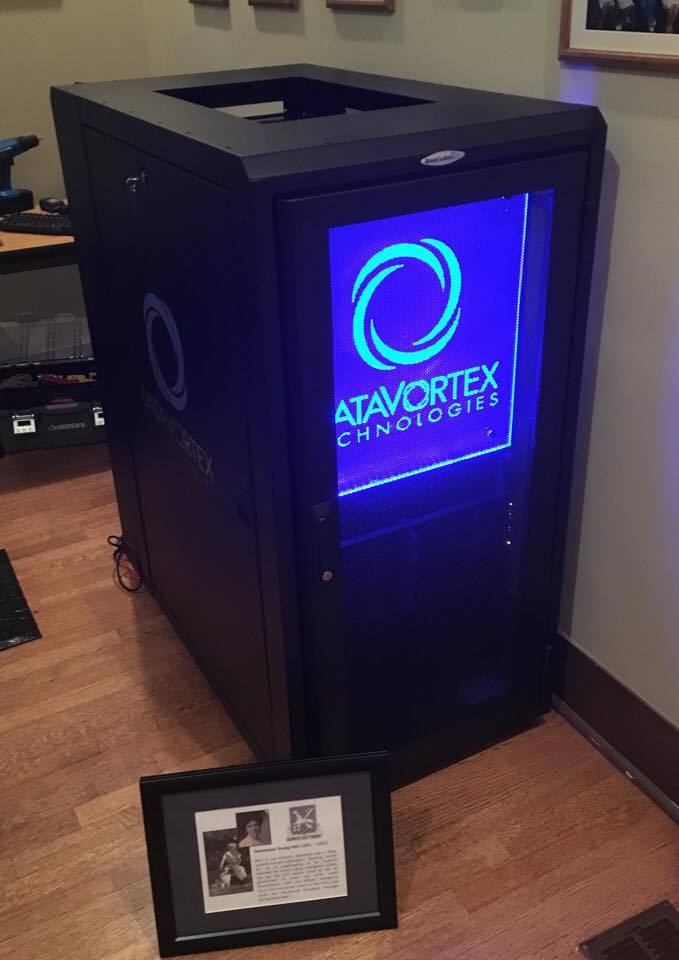 A new DV203 system has been installed in the Austin offices of Data Vortex. Genevieve, (fondly referred to as “Genie”), is an eight node system with current Vortex Interface Cards (“VICs”) installed on a Supermicro Superserver and using Intel V4 processors. Genie includes one of the latest Data Vortex switch boxes that are being installed in our newest systems for sale and customer delivery. “It’s better than anything of this size we have ever used before,” says HPC Systems Manager John Lockman. A localized gateway was installed for the purpose of offering extra security and ease of use for Data Vortex team members. Primary system installation was completed last week by Chief Engineer Ron Denny, Outreach Coordinator Reed Devany, and Director of Research Science Santiago Betelu, PhD, who is authoring a user’s installation manual for integrating and assembling Data Vortex systems.

In keeping with the Moore House’s legacy in mathematics and cryptography and the Data Vortex nomenclature of lending machines the names of seminal women in the history of science and computers, Genie derives hers from Genevieve Young Hitt (1885 – 1963). Born in San Antonio, Genevieve was a Texas socialite-turned-cryptologist. Teaching herself the art of codebreaking as her husband attended the Army’s signal intelligence school, she was the first woman hired by the US government to crack and write coded transmissions. With the Military Intelligence Corps she maintained control of the Army code books and deciphered encrypted messages during World War I.